Numerology and the numbers
Number 43 Meaning

The digits in the number 43 have the digit sum 7 which resonates with the planet Neptune. 43 is often written as 43/7 where the digit sum is placed after the slash. To understand 43 more in depth we recommend you also read more about the digit sum 7 here.

Introduction to the number 43

Number 43 provides excellent political skills and a sense of innovation. It gives revolutionary ideals and the ability to communicate with conviction showing a new and higher path.

43/7 gives the vibration of seeing what needs to change, putting it into words, and helping make a massive paradigm shift. You can change the world by helping to see things from new angles. The life lesson is about having a strong intellectual and philosophical foundation, but where one must learn to bring this wisdom into the world instead of fleeing from physical and emotional life and into the world of ideas.

43/7 can also be very rebellious, contrarian, and choose to live its own life outside of the norms of society. It is, for example, found in the charts of many celebrities who have an anti-authoritarian bad boy "don't tell me what to do" vibe.

In imbalance, there is a tendency to be rebellious and create chaotic upheavals that are not constructive. It can be a rebel without a cause aimlessly wandering from community to community, alternating between being oversensitive and deliberately provocative. It can have difficulty finding answers and is always searching – a kind of eternity student. It can be profoundly confused about a world that it doesn't trust.

When balanced, the number brings innovation, strength, and the ability to transform one's own life and the life of others to new heights through a deep philosophy.

This was just a short excerpt about the number 43. In our online program 'Numerologist PRO Foundational,' we go in-depth with all the numbers where every aspect of the archetype is uncovered using THE NP NUMBERS 1-99 ARCHETYPING SYSTEM™. We go in-depth with Tarot, Tree of life, different numerological interpretations, detailed statistics, and analysis of the NP BIG DIAMOND CHART™ and NP VIBRATION PYRAMID™ charts. To see more about Numerologist PRO Foundational please click here.

The balanced aspects, traits and adjectives of number 43 are:

Observant and profound, charismatic and innovative, revolutionary ideas, interest in society and politics, sense of justice and idealism, changes the world, trusts the process of life, listens to oneself, inspired and philosophical, channels new messages and ideas, great creative potential, metaphysical and spiritual knowledge, good writers, actors and producers, stands by its unique ideas and principles, no problem with going against the flow, charismatic "bad boy / bad girl" vibe, honest and deep in relationships, observing and thoughtful, both sensitive and takes action at the same time, both gentle and firm at the same time.

The imbalanced aspects, traits and adjectives of number 43 are:

Many upheavals in life, alternately oversensitive and deliberately provocative, provokes simply to provoke, lopsided personality, skeptical and vigilant, over-focused on being contrarian and "anti", excessively unconventional ideas, does not fit in anywhere, others do not trust it, perceived as strange, anarchist with no cause, feels its energy being pulled in too many directions, lack of focus and drive, considerable inner doubt about oneself and the world, only finds its belief and faith very late in life, no inner peace, cannot find peace of mind and body, is split between body and mind, sleep problems, is divided between the desire for material security vs. following its ideals, confused about a world they don't trust, "Spiritual vagabonds" - never taking root in a particular place , but moving from place to place, doesn't let others get close, considered to be an outcast or misfit, feels outside of the group/community/family.

Celebrities with 43 in their charts

Rihanna and Robbie Williams are pop artists with a rebellious image. Jacinda Ardern and Justin Trudeau are super modern liberal politicians who embody the socialist/communist views that 43/7 often has. Heath Ledger, Russell Brand, Hugh Jackman, Seal, and Brad Pitt all have a "bad boy" vibe in their auras. Singer Leonard Cohen is famous for his lyrics often addressing social inequality. Actress Maggie Smith is known to play roles where she usually is contrarian and loudly voices her opinion. Desmond Tutu was an outspoken opponent of the Apartheid regime in South Africa. Alan Turing, portrayed in the movie "The imitation game," was a brilliant mathematician, computer scientist, and cryptanalyst that had the 43/7 aspect of escaping from the world into a mental world of mathematics and formulas. David Livingstone was a famous British missionary explorer. He combined the 7 desire to go abroad with the 43 aspect of being rebellious and going where no European had ventured before. Charles Darwin, Jacob Grimm, and Thomas Jefferson were brilliant thinkers who changed many paradigms with in-depth philosophical thinking.

43 is under the influence of NEPTUNE

The Big Diamond Chart™ for 43 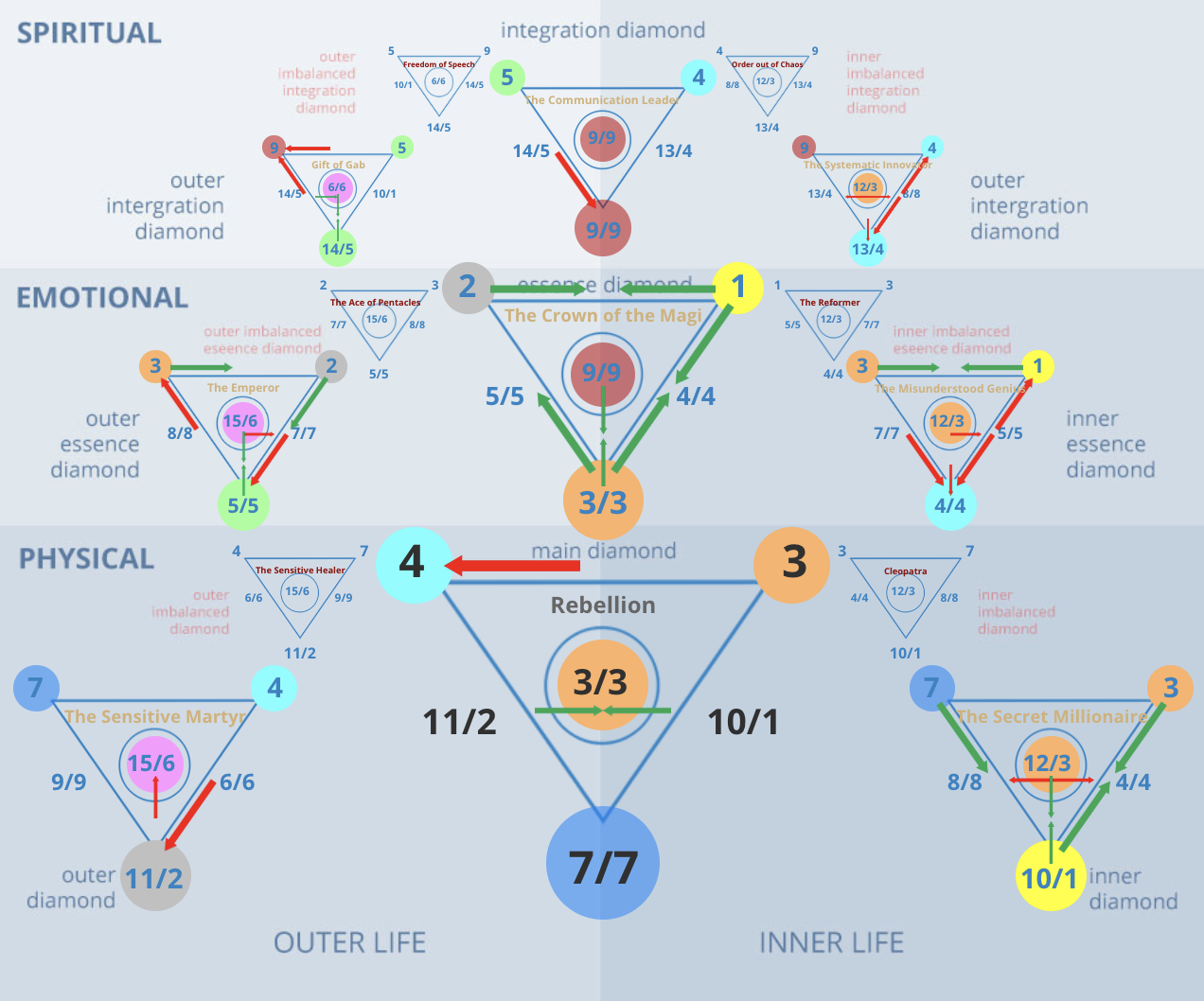 The Vibration Pyramid™ for 43 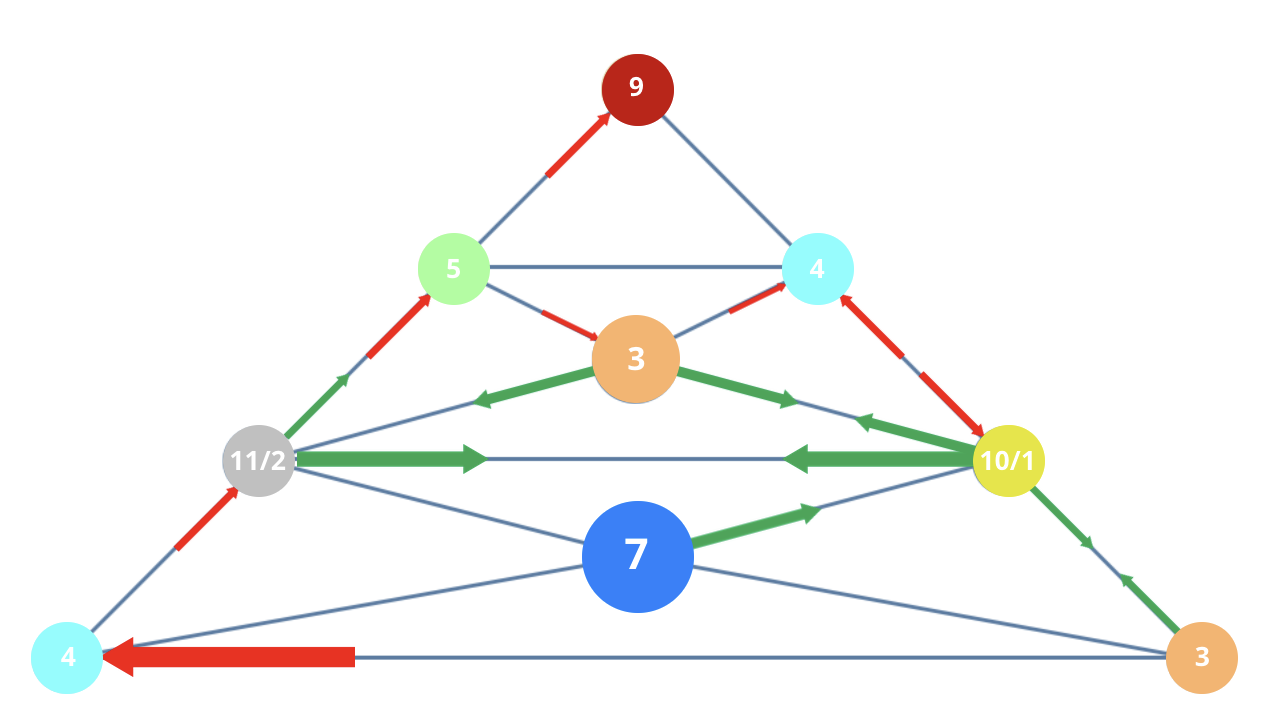