Numerology and the numbers
Number 85 Meaning

Introduction to the number 85

The number 85/4 vibration is called a "world conqueror," just like the number 58/4, and like 58/4, 85/4 wishes to conquer the world with its new and genius ideas. 85 is more controlled and thinks more about the consequences of its actions. This number gives an interest in politics, business, and expansion, both materially and in terms of influence. Because the 85 has a digit sum 13/4, it does things in its own unique way. But at the same time, we have the number 8, which is very "traditional" and likes to do things in the same way as they have been done for generations. This exciting blend between traditional and new gives the number 85/4 the ability to succeed through a very original career. It could, for example, introduce something revolutionary into a very traditional career path or create something revolutionary, but in a traditional way.

The number 85/4 gives toughness and expansion power and is seen in the charts of many celebrities and politicians who quickly rise in fame and fortune.

In imbalance, there can be competition and a power-hungry and insensitive attitude. It can be bossy, changing its mind constantly and creating absolute chaos in the surroundings because it continually second-guesses its actions. In time it can start suffering from inner turmoil with constant overthinking, never knowing where to begin with its vast ambitions.

In balance, the number 85 provides a super growth potential that will strengthen your career that will often be both unique and within something established.

This was just a short excerpt about the number 85. In our online program 'Numerologist PRO Foundational,' we go in-depth with all the numbers where every aspect of the archetype is uncovered using THE NP NUMBERS 1-99 ARCHETYPING SYSTEM™. We go in-depth with Tarot, Tree of life, different numerological interpretations, detailed statistics, and analysis of the NP BIG DIAMOND CHART™ and NP VIBRATION PYRAMID™ charts. To see more about Numerologist PRO Foundational please click here.

The balanced aspects, traits and adjectives of number 85 are:

Expansive and thinks out of the box, big life mission, thrives as things move forward and expand at a rapid pace, thrives with big goals, fast, powerful and spontaneous in its actions, has many unique ideas, career success is essential, wants to make a personal impression on everything, goes up against established norms and rules, innovative, focused and gets things done, does not deviate from its goals, a unique career and pioneer spirit, organizational talent and practical sense, thinks long term, result oriented, actions have a significant impact on the world / surroundings, does things in its own way, is both unique and structured, makes new norms within the tradition it belongs to, can have an exceptional career in a very conservative way, or a traditional job in a very unique way, wants to expand its outlook on life through travel and finding other ways of doing things, world citizen that thinks globally, has goals far out in the future, builds solid foundations step by step, accumulates physical wealth, determined when it has set a goal, efficient and businesslike in all areas of life, observes others and their surroundings without prejudice, discovers new opportunities others don't see, wants to expand and make a difference in social contexts, a more "together" and stable version of the world conqueror (sister vibration 58/4), honest and says things straight, conscientious, loyal and dedicated, is happiest when in the process of creating its future, can focus intensely on details for an extended period of time, conservative and protective, creates own career, stubborn enough to stick to a project, often athletic and in need of intense physical activity so the energy does not get stuck, likes a fast pace and pacing itself forward, quite social, but has a sense of hierarchy and doesn't talk to anyone, healthy independence in career and needs to create its own life foundation, thrives on significant challenges, super focus and super powers.

The imbalanced aspects, traits and adjectives of number 85 are:

Inner chaos and turmoil, takes on too much, can't hold its big ideas, fear of its greatness, fear of failing, fear of success, makes itself less than it is, trials and hard times, doesn't know where to start, the ideas are so grand that it can't even believe them itself, excessive need to be appreciated and honored, attracts such significant challenges that it topples over them, builds up to something big and gives up just before it is completed, self-confidence decreases as one's projects go awry, gives up on the challenges, the ideas are too unconcrete to be implemented in real life, may be over-focused on the body, authoritarian and controlling, controls others from behind the scene, undisciplined, takes things too seriously, can go over the boundaries of others with its authority and stubbornness, extremely ambitious but doesn't know where to start, breaks everything down and needs to start over and over again, inner fury and discontent, feeling trapped and "stuck", feels very bad when there is no growth.

Celebrities with 85 in their charts

85 is under the influence of URANUS

The Big Diamond Chart™ for 85 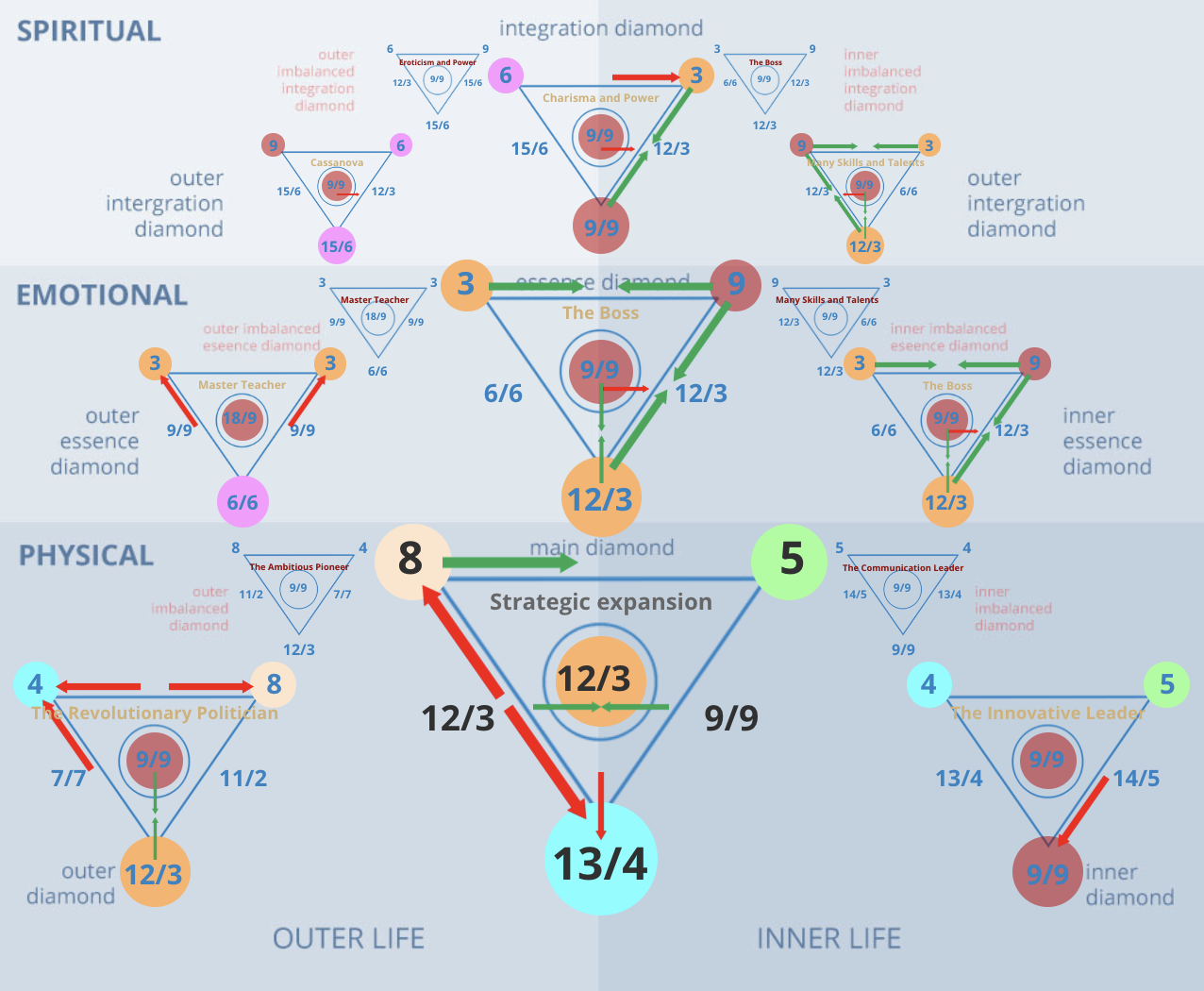 The Vibration Pyramid™ for 85 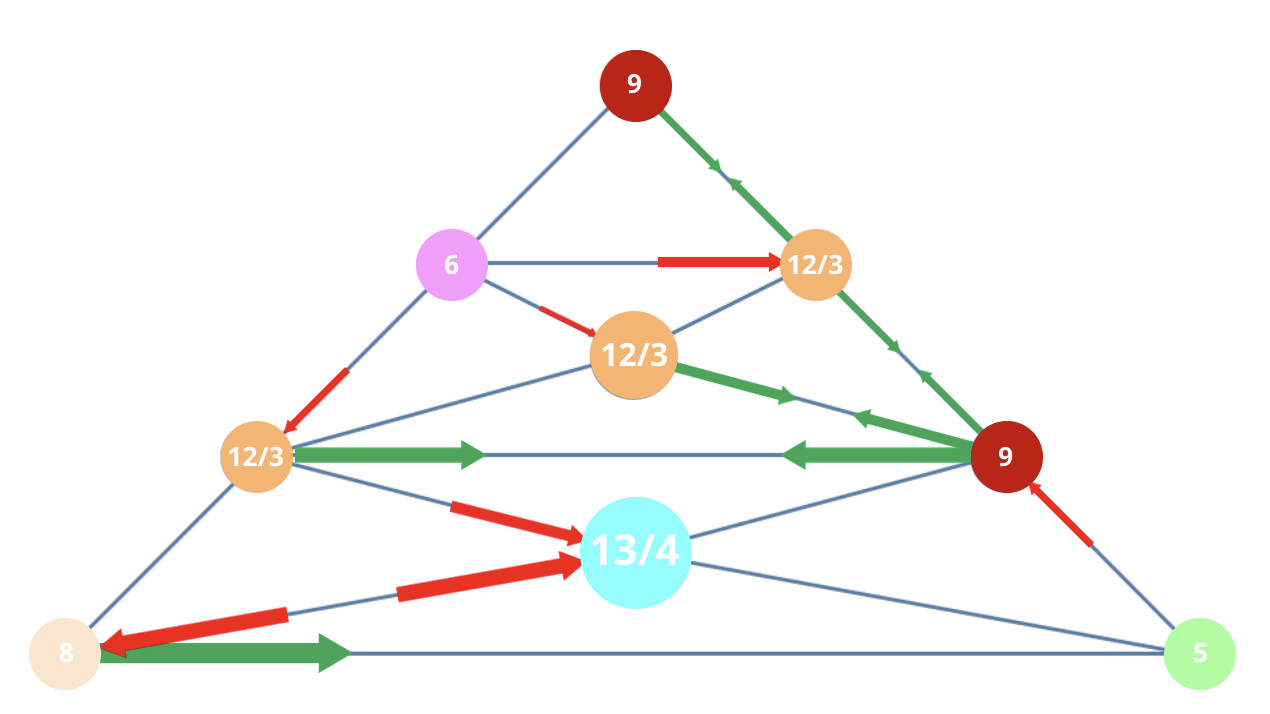