Numerology and the numbers
Number 13 Meaning

The digits in the number 13 have the digit sum 4 which resonates with the planet Uranus. 13 is often written as 13/4 where the digit sum is placed after the slash. To understand 13 more in depth we recommend you also read more about the digit sum 4 here.

Introduction to the number 13

13 is a number that gives originality, depth of personality, and an ability to transform oneself and others. The number 13 resonates with the planet Uranus, which stands for innovation, new ideas, the genius mind, and transformation.

Number 13 plays a significant role in our culture and has a lot of deep symbolism. To understand this complex number, it is valuable to look at the symbolism in the tarot card for number 13. The Tarot card 13 is called DEATH, which symbolizes that the old must die to bring forth the new. This is true of the outer physical world and our inner universe.

The number 13 is the most transformational of all the numbers with digit sum 4. You wish to create transformation on the outside and in the inner world. Therefore you cannot help but do everything in your unique way – something that will reflect in your style and taste. Many 13's have deep artistic talent but can also possess great healing and political expertise – prevalent in healing and politics is the potential to remove the old that no longer works and replace it with new mindsets and systems.

13/4 appears in the charts of people who think differently and out of the box. There is often a desire to be rebellious and not follow the herd. It also gives talent in intellectual pursuits. As an interesting example, many jazz musicians are born on the 13th of the month. Jazz is both a rebellious and an intellectual type of art form that appeals to the number 13. We also find many people with a spiritual inclination born on the 13th (Numerologist PRO Statistics).

In imbalance, the number 13/4 gives many problems and upheavals where you have to reinvent yourself again and again. You never feel that you quite fit in anywhere, and you wind up becoming the black sheep. The grass always feels greener somewhere else, and you find yourself in a continual state of longing for something else in life. 13/4 can be the most contrarian and anarchic of all numbers, scaring others with rebelliousness and contempt of authority. It can bring the worst out of others through silent disapproval.

In balance, the number 13/4 is a powerful number of innovation and healing. You download divine inspiration and transform everything around you, successfully removing the old and replacing it with something new and much better. 13/4 is artistic, therapeutic, has political skills, and is a good performer.

This was just a short excerpt about the number 13. In our online program 'Numerologist PRO Foundational,' we go in-depth with all the numbers where every aspect of the archetype is uncovered using THE NP NUMBERS 1-99 ARCHETYPING SYSTEM™. We go in-depth with Tarot, Tree of life, different numerological interpretations, detailed statistics, and analysis of the NP BIG DIAMOND CHART™ and NP VIBRATION PYRAMID™ charts. To see more about Numerologist PRO Foundational please click here.

Death is the 13th card in the Tarot. The card shows the Grim Reaper, and when used for divination is often interpreted as signifying major changes in a person's life.

It symbolizes that all the old and dysfunctional must give way to something new and better. This is true both in the physical world and inside ourselves (the psyche). 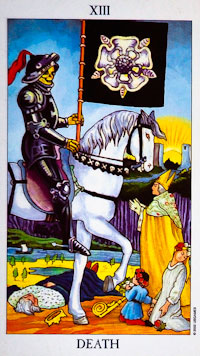 The balanced aspects, traits and adjectives of number 13 are:

The imbalanced aspects, traits and adjectives of number 13 are:

13 can bring forth the worst in the numbers surrounding it in the different numerology charts, inner dissatisfaction, the black sheep, always longs for something else than what it has, not able to bring ideas to life in the real world, has to rebuild itself many times during its life, fear of the future, disappointment, can be betrayed by others if it negatively uses its power, contrarian - always in opposition, complains, makes others afraid, brings forth the worst in others, tendency to say "no" to everything other people say or suggest.

Celebrities with 13 in their charts

People born on the 13th of a month have a rebellious streak. Here we have:

13 is under the influence of URANUS

The Big Diamond Chart™ for 13 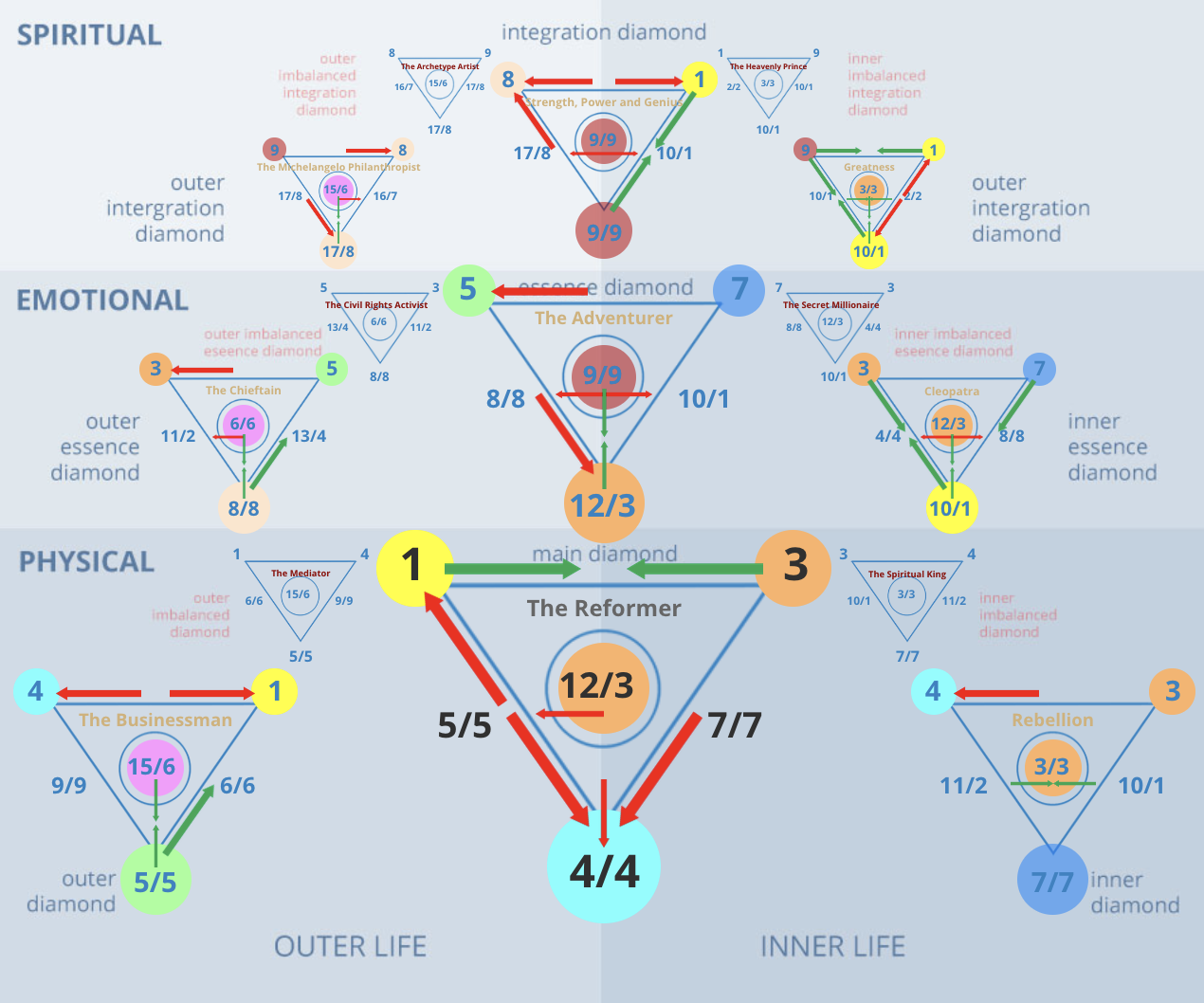 The Vibration Pyramid™ for 13 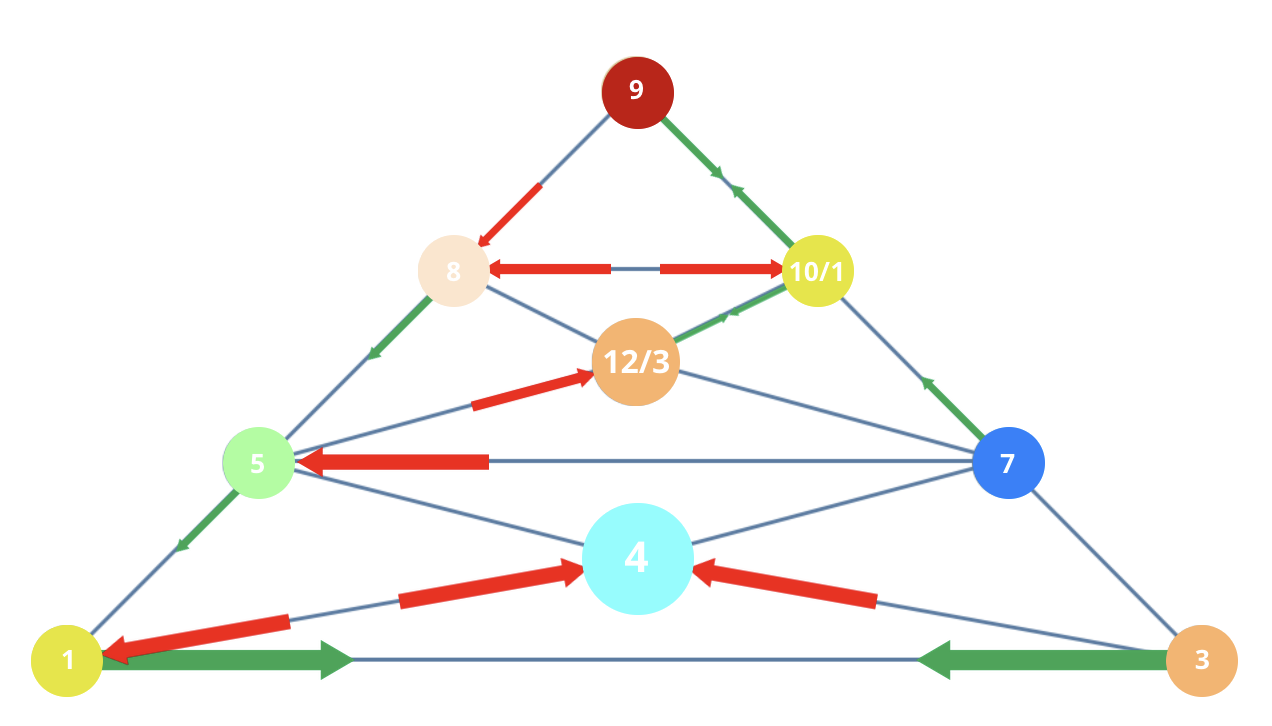