Numerology and the numbers
Number 48 Meaning

Introduction to the number 48

The number 48 vibration shows new and better ways forward based on strategic, intellectual, and analytical work. It gives an ability to investigate profoundly and focus on the smallest detail. There is always a tendency to question established knowledge and systems and, in some instances, a desire to provoke authority.

This number is best suited for intellectual and complex tasks, for example, research and political strategy. This number will also allow you to become an expert in your field. Beware though of intellectual arrogance.

In the right circumstances and when properly nurtured, this number can give a high intelligence.

In imbalance, the 4 and 8 start an inner battle. The 4 wants to renew, but the 8 wants to keep things status-quo. This results in continual inner second-guessing. There is a tendency to start things and to doubt them later. In time, inner and outer forces tend to tear the bearer of this number apart, and you can feel enormously conflicted about your actions. It requires a great deal of awareness to get the best out of this number. 48/3 can feel completely split asunder between the 4-8 tension and can never decide or move forward. The 4-8 tension can become a deep rebelliousness where you never know whether to go with or against tradition. One becomes deeply dissatisfied with one's life situation and continually wants to change the whole frame. The tendency to constantly second-guess one's actions can lead to accidents and mishaps. In severe imbalance, 48/3 can lead to mental afflictions and autism because the mind is in a continual state of inner conflict.

Due to this tension between 4 and 8, the number 48/3 is very reviled in many forms of Chaldean numerology. Even though 4 and 8 can learn to speak to each other, much energy is needed to make these opposing energies meet.

This mixture of numbers can lead to chaos, revolutions, misunderstandings, etc. But as we mentioned, it can also lead to pioneering work, positive upheavals, necessary transformations, and new ways of seeing things.

This was just a short excerpt about the number 48. In our online program 'Numerologist PRO Foundational,' we go in-depth with all the numbers where every aspect of the archetype is uncovered using THE NP NUMBERS 1-99 ARCHETYPING SYSTEM™. We go in-depth with Tarot, Tree of life, different numerological interpretations, detailed statistics, and analysis of the NP BIG DIAMOND CHART™ and NP VIBRATION PYRAMID™ charts. To see more about Numerologist PRO Foundational please click here.

The balanced aspects, traits and adjectives of number 48 are:

Tradition and renewal, innovative and creative, often academic, often political, very hard working, forms its own new opinions based on knowledge and facts, extremely independent, structured and proper, strong and pronounced attitudes, practical and grounded, creates functional systems and processes through analysis, improves the world and everyday life step by step, socially conscious and responsible, expansive, personal power and impact, mental strength and clarity, accountable and loyal, logical and analytical, expands its knowledge throughout its life, easily incorporates new ideas and systems, both in touch with the future and the past (new ideas versus history), busy with what it can learn from every situation, analytical mind, good memory, high readiness, innovation in many fields, strong and professional ambitions, troubleshooter, solves complex problems, good self-control, a pioneer in new areas, learns a lot from mistakes, stable processes are essential for well-being, enjoys being alone and working mentally, exudes competence and confidence, solves own and others' problems, creates mental clarity in all things, natural skepticism and sober analysis.

The imbalanced aspects, traits and adjectives of number 48 are:

Mental confusion, starts many things it never completes, "speeder-brakes" phenomenon - starts something but straight away doubts what it started, problems finding one's way in life or career, disorder and no systems in life, creates chaos in life and surroundings, can't feel its emotions, temperamental outbursts and anger, memory failure and difficulty concentrating, feels misunderstood, feels like a victim, turns things upside down, over interprets what others say, socially isolated, seems cool and closed, feels lonely - even when with others, may attract diseases, may attract accidents due to attention deficit, is "the black sheep" of the family, lack of confidence, exudes bitterness and harshness, seems angry and contrarian, experiences a lot of internal conflicts, difficult time choosing, restless mind and body, experiences many problems in life, bad karma, withdraws socially and from the world, negative outlook on life, nihilistic and cynical, harsh opinions about others, closed heart.

Celebrities with 48 in their charts

An excellent example of this is former president Barack Obama born on the 4th. August 1961. The date is remarkable because August corresponds to 8, and 1961 has digit sum 8. Obama's day of birth 4 makes an outer 48 diamond with the month 8 and an inner 48 diamond with 1961. Obama came to power through his extraordinary rhetoric promising change and transformation (the number 4) – but his presidency was bogged down in strenuous fights with the traditional order and the republicans (symbolized by the number 8). Obama left office an exhausted man with gray hair, his changes not evident on the surface – perhaps time will reveal his contribution. His presidency shows the struggles that 48/3 must face when it takes on the establishment.

48 is under the influence of JUPITER

The Big Diamond Chart™ for 48 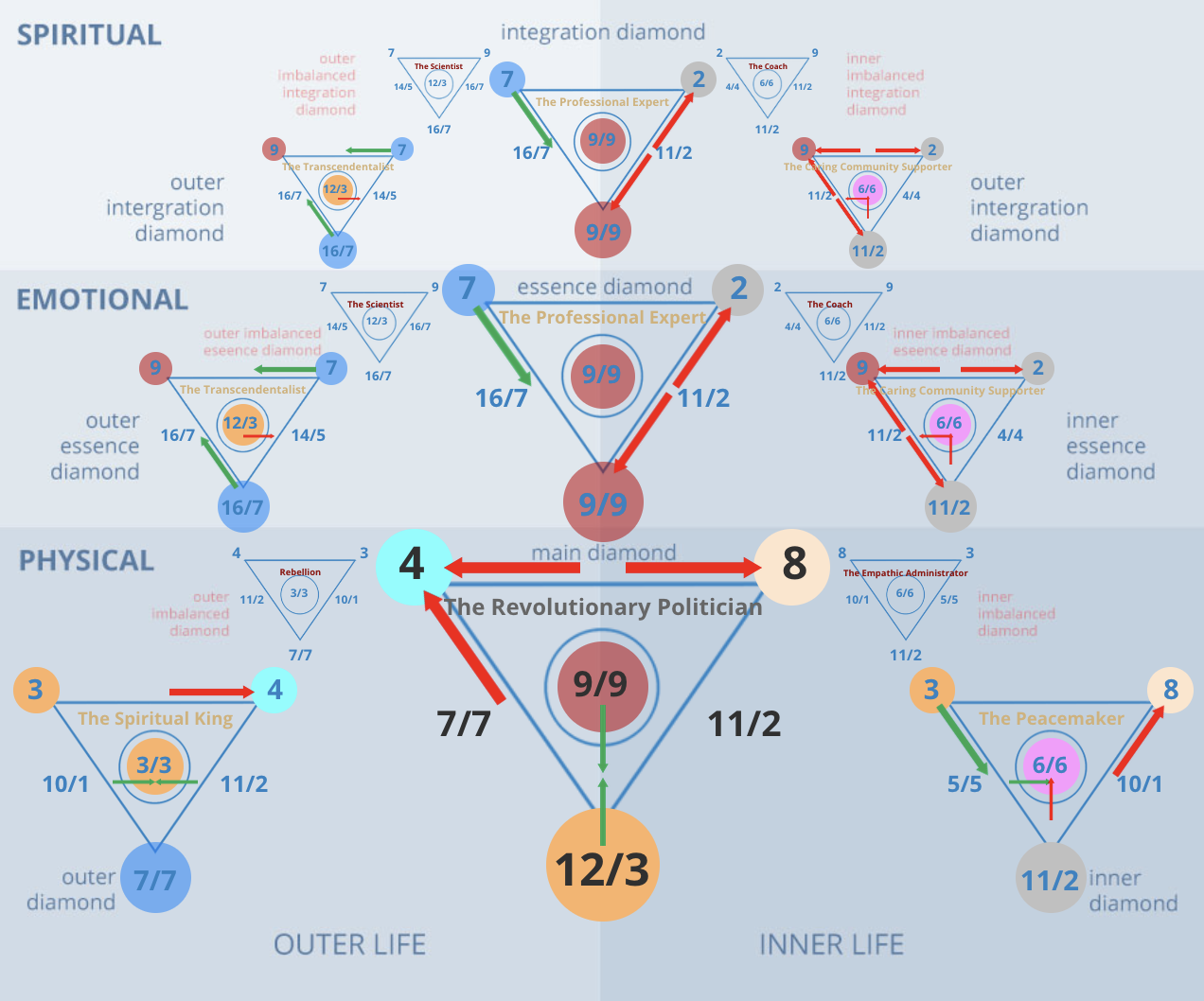 The Vibration Pyramid™ for 48 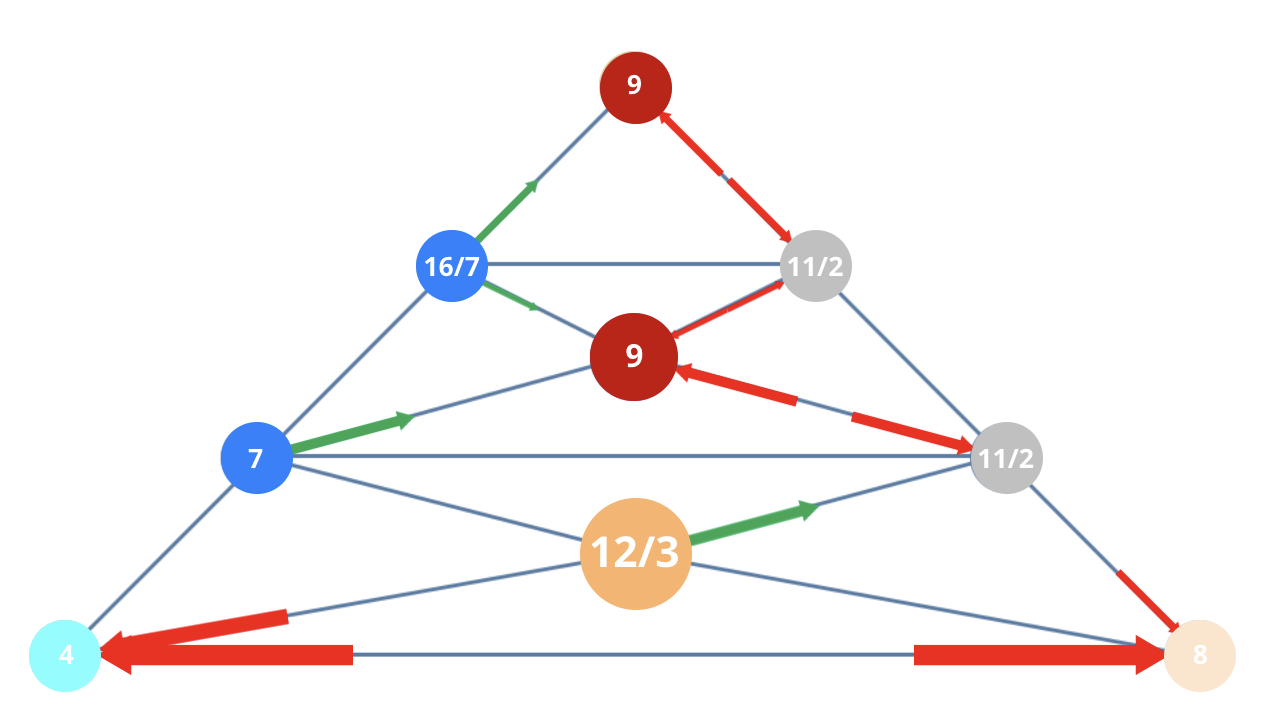